Listening to climate “skeptics” talk about climate zombies is frustrating. Listening to scientists talk about how to out-communicate them is even more irritating.

But how does a grad student, as green as an Iceland spring, approach the elite researchers of her field and say, “you’re looking at this all wrong?”

made climate change stacked against 3 skeptics does NOT accomplish what they hope for the near or far-right conservative crowd – a demographic we need to start pulling in. It leaves a very simple and damning window: what about the 3 who disagree? Why do they disagree? How do we know you aren’t silencing people who disagree with you? They are the underdog, the “oppressed” scientists of our group, and for a skeptical (slightly paranoid) conservative-leaning individual with a limited geoscience education, that’s all it takes. 3 percent = doubt.  I’m not saying we shouldn’t be fighting the wildfire that is a religious belief in a lack of consensus, and this is incredibly effective with moderate individuals, but we are not doing enough to pull in the half of the country that leans to the right.

Of course there are myths out there about climate change – there a million websites busting and bolstering these myths. At the end of the day, they’re all still just websites floating in the eternal abyss that is the internet. It’s incredibly non-personal.

SO AGU has a membership of 60,000 scientists and educators. They brag about this, saying surely they can put their heads together and come up with a way to communicate these issues and lower the overall level of misinformation out there. Putting your heads together for deriving complex climatological models is great – for reaching the strange beast known as “the public,” not so much.

You have 60,000 people. Team up with the AAG, the AMS, and every other scholarly group out there and… dare I say it, GET ON THE STREETS.

New media is vital to educating the masses. But as a young person who’s education is centered on new media, I can assure you new media alone will not resolve this issue.

If you want to see an overwhelming change in public opinion, look at Obama’s geek squad that got him elected in 2012. Micro-marketing, going door-to-door to targeted groups and individuals, won him the election by a very significant margin. They tracked facebook, twitter, mailings – any public resource to find out what people are talking about – to get to people and bring them to the light, so to speak.

Frank Luntz seems like a God to most scientists because he is so good at something we are very bad at. But there’s no secret formula to what he does – focus groups, research on psychological effects of grammar, and think-tank sessions where groups of writers sit in a room and bounce words and phrases off each other until something “sticks.” We should have been doing this 30 years ago.

Then comes the rebuttal from our community. They come in three forms, “we don’t get paid enough to do that,” “I don’t know how to talk to people,” or simply, “I’m afraid.”

First, we don’t get paid very much because the general public doesn’t believe what we do has any tangible benefits. If you can change that, funding will become available. Take 8 hours a month, say a Saturday, and go door to door in the community. Together, we could develop a nation-wide plan for every community. This means producing user-friendly publications, apps and resources. Developing bullet points and roping in our students to get the message across. Stop talking about climate change by 2100, and show them how it’s already changed. Move past the debate and jump into what we can do. Stop being afraid of saying, “that person has no idea what they’re talking about.” This a war. And we’re losing.

It’s quite simple, albeit time consuming. Hold community forums once a week. Go to schools, churches, community organizations. Hold training sessions for your local weather people, help them develop  30-second and one-minute TV spots. They reach more people on a daily basis than we can ever hope to get. We have to get out there and talk to people. We are talking about the fate of our existence on this planet. If you are not willing to give that time, don’t complain about how we aren’t making progress. 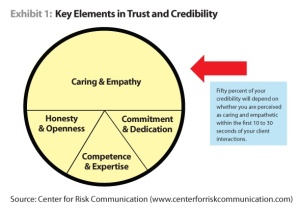 Second and last, the “general public” isn’t some volatile, nasty beast waiting in the dark with a double-barrel shotgun. They are my parents, friends and family and probably yours, too. One-on-one, they listen. Research shows that “caring” is the most important quality to communities during a disaster, and having ties to a community gives you trust and authority. Go on local talk shows, visit schools and museums, take any opportunity to get the information out in an effective way.

So is the 23-year old graduate student with dual majors in climate and journalism telling you to stop what you’re doing and get some boots on the ground? To hell with Twitter and Facebook? No, not quite. We need those things, too. You will need a design team to produce handouts, pamphlets, etc. You will need a blog and a twitter account, and someone to maintain it. But until we start talking to “people,” who feel they are constantly being told what to think by complete strangers, public opinion will not sway the way we need it to. So let’s get it done.

** I know we will get into more specific strategies this week, which I am thoroughly looking forward to it. But we need is an environmental public relations campaign that outdoes our outdoers. Love this conference, the topics, and the people here.